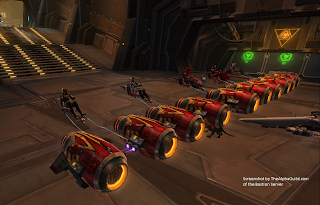 Despite making a wrong turn and coming back to the finish line, Azwraithmeow of Hakuna Rakata won the Aldeeran race cup.  Key to his success was his years of playing Super Mario Brothers, allowing him to tackle the rocks on Aldeeran's treacherous waterways.  His perseverance in following the judge through the rocks gave him an early lead.  We'd like to also recognize Ultima-weapon, another Hakuna, for coming in 2nd place despite Sith ambushes waiting his way at one outpost, and also Penguinkiller, from Hidden Sound, who repeated another top 3 win despite having a disastrous time at "the Rock".  He was able to come from behind to recover.

We'd also recognize Ti-shu, the only Imperial, that joined the race (the other Imps just tried to ambush, how typical).  He actually landed on the correct bridge (unlike Azw that made the wrong turn); however, he failed to do a /wave check-in which disqualified him from the final win.

Videos to be posted below...


And now for a little screenshot of the 1st place prizes... 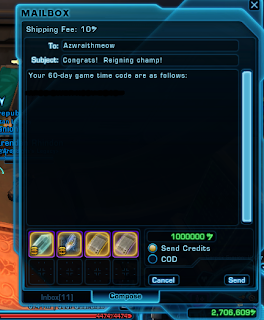 Posted by Publisher at 1:37 AM

The Alpha Republic is one of the original guilds from Star Wars: The Old Republic's (SWTOR) The Swiftsure server. It is a "closed" guild.

Born even before the beta phases of SWTOR, we primarily focus on three game areas: PVP (daily), PVE (weekly), and Crafting/Logistics. We originally came from The Swift Sure server and was merged with The Bastion server.

Guild Rules:
Simple policies can be found on our FB community page.

How to get materials (mats)?

You can see a nice tutorial on how to get molecular stabilizers for free: LastDon's tutorial